It was my fifteenth year of continuous travel to Kabini, the southern part of the famed Nagarahole National Park. Ever since I quit my IT job and became a full time photographer some 12 years ago, I started traveling farther and wider. Gradually, my visits to places like Bandipur and Kabini, decreased.

Somewhere in the years 2012-2016, I must have travelled 200+ days a year and most of them were destinations out of India. Svalbard, Kamchatka, Pantanal, Patagonia, Botswana, United States and the list goes on. I guess I could be one of the handful of Indian Photographers, who may have stories to tell about Jaguars, Polar Bears, Pumas, Lions, Leopards, Tigers, Cheetahs and even the Snow Leopards off late. But one animal’s sight and photograph was evading me for all these years. Or I must admit, I didn’t really care much about him in the last few years.

I remember two occasions where the Black Panther in Kabini was in front of my eyes, but since I was guiding a group then, we hardly had a window of opportunity, I didn’t make it to the pecking order. However, the other time, I didn’t feel I would like to sacrifice the pleasure of seeing him, by taking pictures in the cluttered view that I had. I was sure it wouldn’t make a good photo. So I never had the black panther image, or BP as regulars to Kabini called it.

Did it increase my BP at times? It’s anyone’s guess.

Listen to the story in Jayanth's voice

So, here came the worst year of all businesses in this century and I was in the midst of a huge crisis like every single person on this planet. That meant, no more Kamchatkas or Botswana, only Kabini and Bandipur, post lockdown and I thought it was perhaps a blessing in disguise.

Since June 2020, I have spent 26 days in Kabini. Don’t worry, the BP wasn’t the reason. We opened a new store in Kabini in August and I have been preparing for it since the end of June and most of July. And since I ended up hanging around Kabini a lot, I subscribed to the black magic and got engulfed in a series of decisions which made it seem like I was chasing success.

On a photo-tour recently I was proud of my travel accomplishments while a young kid made me realise, I still had something I had not photographed. The Black Panther.

Now, once I got in the mood of wanting a BP shot, I surely did something that was uncharacteristic of me. One of which was keeping a travel kit, bag and camera gear ready, and on standby, which didn’t make me take time to pack, if in case, I had to rush to Kabini. Why did I have to rush to Kabini? Let me explain.

While there were a zillion theories of when the BP usually shows up, amongst which the most bizarre was the full moon night or let’s say the Purnima. And many more that I don’t even remember now. But one thing I agreed to was, the BP’s territory, overlaps the tourism zone in the Antarasante Range and the Balle Range and perhaps also the Nagarahole Range. Only he knows where all he ventures into, as none of us know what exists in the core-zone of the park.

So once he shows up in the tourism zone, chances are he will stay here for a couple of days. This logic seemed a bit more logical and in the last couple of months, I ran to Kabini at least thrice at the drop of a hat. Was I desperate? I wonder how to say no.

One the June 25 evening, a couple of guys from Bangalore, saw him walk across the road and take a long walk into the fire line. It must have happened at around 4:25PM, and at 4:45 PM I saw pictures of the sighting captured from the LCD view of the wildlife enthusiasts who had seen it. Trust me, at 6:45 I was near Bidadi, which is the outskirts of Bangalore on my way to Kabini. That night, I reached Mysore and the next day, went to Kabini hoping to find him on a tree in the famed A zone.

It took me 21 safaris to realise, I was on a wild goose chase and this fellow had casted a black magic spell. On the first of July he was spotted walking across an area, we hadn’t imagined. We were in fact thoroughly scanning an area around the core-area while he probably had romance on his mind and was courting a female Leopard the regulars call Cleopatra. No one saw them together though. This morning, a young couple filmed him on their phones and the lady showed me her iPhone footage of the BP, while my BP this time was going down in utter disappointment. I was 200 meters away and hadn’t seen him.

Meanwhile, I met my good friend and ace wildlife filmmaker, Sandesh Kadur during lunch who was also filming in the park then, and on July 6, after the morning Safari, I left Kabini. The reason why I call this a black magic spell is because at around 4:45 PM on the 6th of July, I get a call from one of my favourite drivers who asked me if I was in A zone or B zone. I laughed and remarked that I am entering the danger zone, Bangalore traffic. But my laughter didn’t last long, when he said “Ayyo….kariya marad mele ide…bari muvvat adi duura” – roughly it translates to “The BP is around 30 feet away sitting on a tree”.

It was surely a pinch of salt experience. I continued the drive back home and forgot about the BP for a while as I had already spent 10 days doing work in the Kabini store and behaving very indifferently, as you know it was the black magic spell.

I have a friend, Amit Sharma, who I have known for 15 years now and now he joined my black magic spell and we both kept bags and camera ready the next time we had to rush. Days passed as Kabini was shut down due to the protests of locals which I thought was apt, that the crowd from Bangalore, were possibly going to spread the virus to villages if they continued to flock the area.

Situation in Bangalore was tense and soon, the Chief Minister called for another 10 day LockDown in July. It was again time to keep aside our zoom lenses and login to Zoom. I conducted another webinar during this time and patiently waited for Kabini to open up.

I didn’t go back to Kabini until I had a group during the August 15 weekend that I was hosting and it was not great with big cats that particular trip, though we had extremely enjoyable and friendly guests. I came back again, this time forget the BP, not even a Leopard or a Tiger. I must admit, that’s very normal in Kabini. I was back from Kabini on Wednesday, the 19 August after two back to back tours which were fascinating in their own way, but we had no sign of BP since July 6.

On 22 August, Saturday, Revanna, one of the naturalists in Kabini sent me pictures of his guests who had seen the BP with him. The pictures were disturbing while they were exciting at the same time. He looked injured and chatter on whatsapp groups started about his last leg of life.

I started to wonder, if I had missed the opportunity of seeing a Black Panther ever?

Black Panthers aren’t a different species, they are normal leopards who develop melanism. So it wasn’t like the only BP in the history of this planet, but hey, this guy wasn’t just another BP. He had developed a great amount of tolerance to safari cars which meant he was probably going to be the easiest to photograph.

Did I say easy?

Well, I meant relatively. So I called Amit, who had promised his wife and kids a dinner out that night as it was his 25th anniversary. Anniversary? Amit? Are you kidding me? I thought. But at some stage, matrimonial harmony was as important as well. While I couldn’t understand his priorities that day, I guess what has to happen, has to happen. So we left for Kabini on Sunday morning.

Guess what? We were not sure, if we should hope he will be sighted again? Or should we hope, no one sighted him and we feel better? Am not sure. Doesn’t matter. 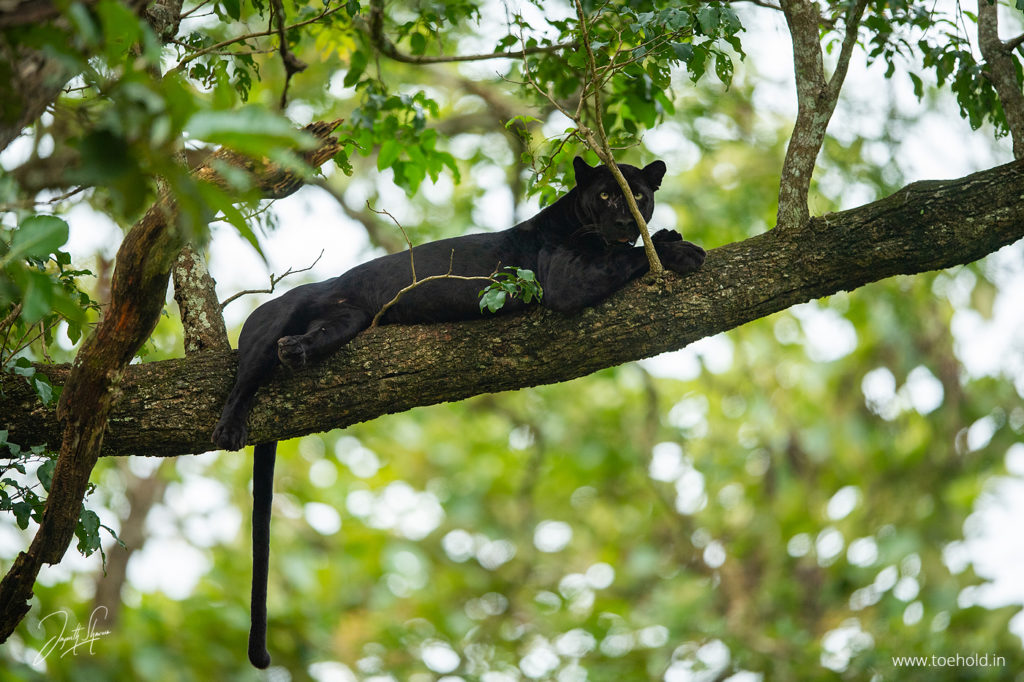 Sunday and Monday had passed. There was no sign of him. Every time we were in Zone A (As we also need to go to B as a rule of the park) we had to resist the urge to rush towards a family of Tigers that were frequently sighted in order to keep our focus. We just went on and on searching for signs of him or calls in the area where he is sighted usually. For regulars, the Balle Baraballe road and the Kymara junction area.

On Tuesday morning, I was with an ace driver guide – Anil. We stopped at the exact place where he was sitting on Saturday morning and Anil remarked “Blackie..blackie” and the blood pressure had suddenly risen. It was still 6:53 AM and we moved 20 meters ahead to find ourselves ogling at what had caused all the black magic. It was the first time I saw him this close and for this long, without a single leaf covering his face, allowing me to not just use three different focal lengths like the 600 f4, 400 2.8 and the 70-200 2.8 on the Sony A7R4 but also enjoy him with a pair of binoculars. 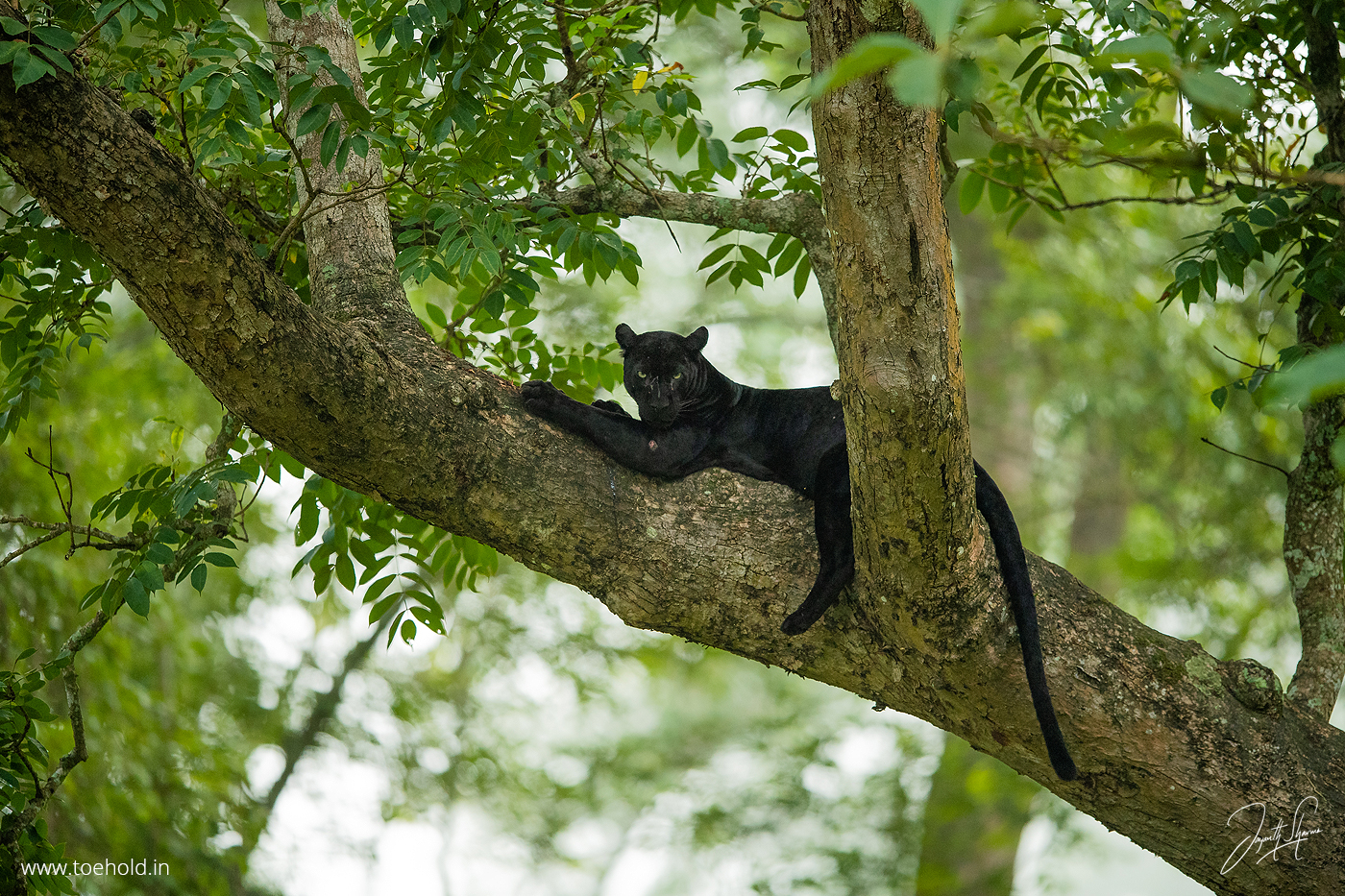 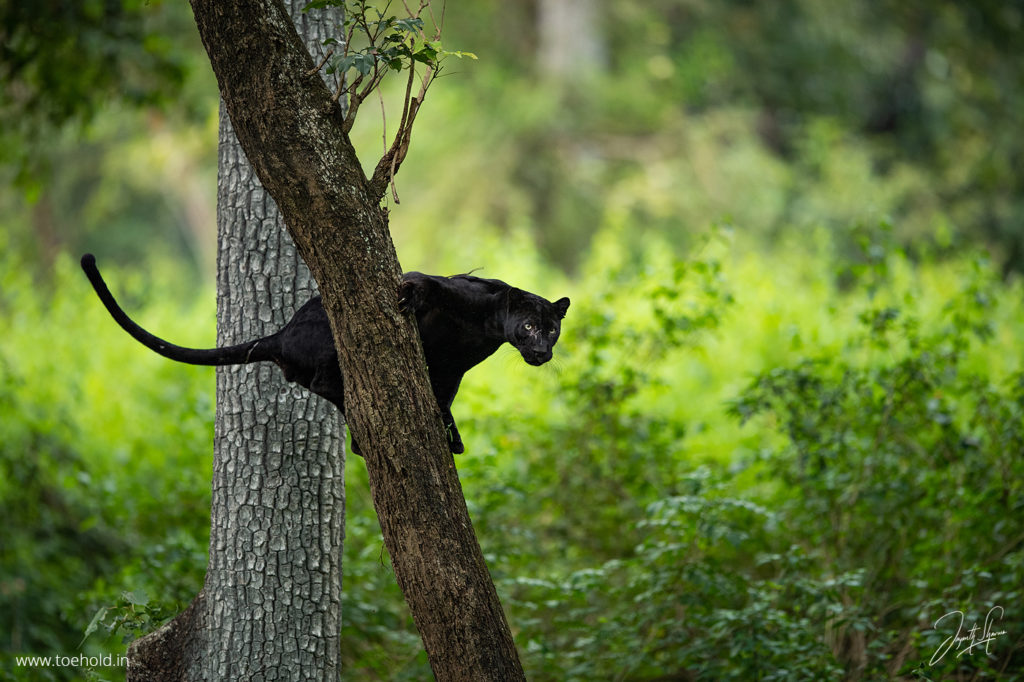 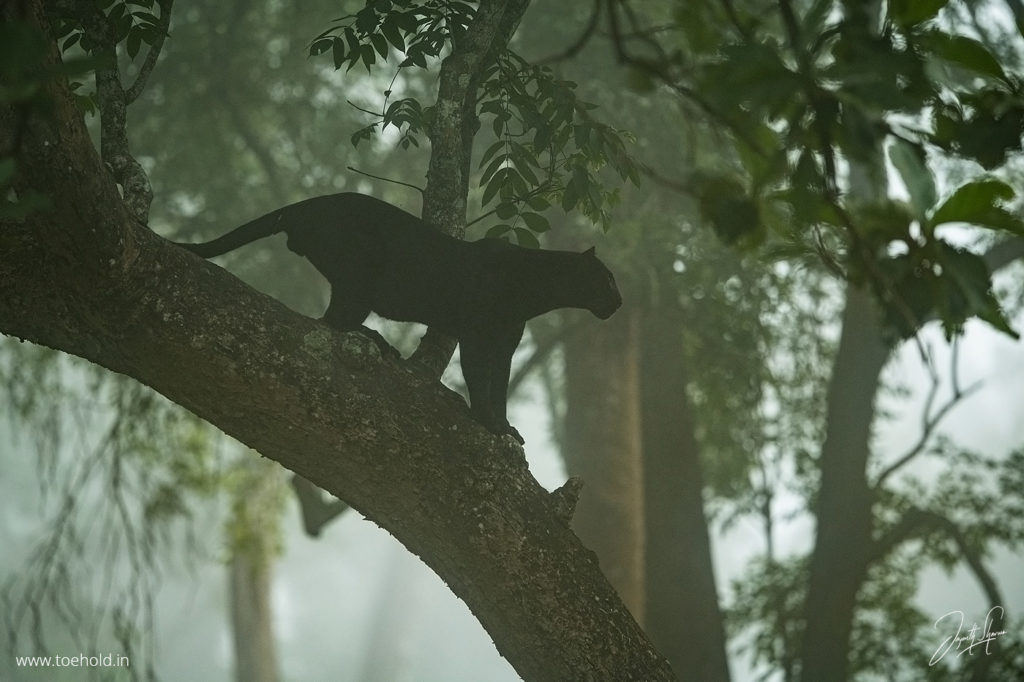 For 17 minutes we enjoyed sighting him in various conditions. One such condition was the carpet of fog, sweeping the canopy of trees like a drape, covering him for a couple of seconds. Oh, gosh, am I getting poetic? No – it was just the Black Magic.

Soon a plethora of vehicles came there to look at the BP. But they had to be happy looking at the LCD screen with my photo of him. I was too excited to be thinking about what people in other buses and cars would feel like since they haven’t seen him.

Later that evening, we did exactly what we were doing for the last two days. Looking for him in the same area. After nearly two hours of looking, one of the guests in my vehicle spotted him sitting on a 40 foot high branch above the ground. No wonder, we had missed him while he must have been looking at us from his balcony.

Soon, he got down, and walked for half a mile on the safari tracks. Crossing the road only to vanish into the unknown. It’s been over 2 weeks now and we are yet to hear of him. But we haven’t gotten over the magic. We still can’t believe what we saw.

Today, I printed a massive 44” print of the black lord on canvas. It’s gone for framing as we speak and I can’t wait to get back to Kabini not just to breathe fresh air, but to our new Kabini store and maybe try my luck at blackie again?

I am under a spell. It’s Black Magic. 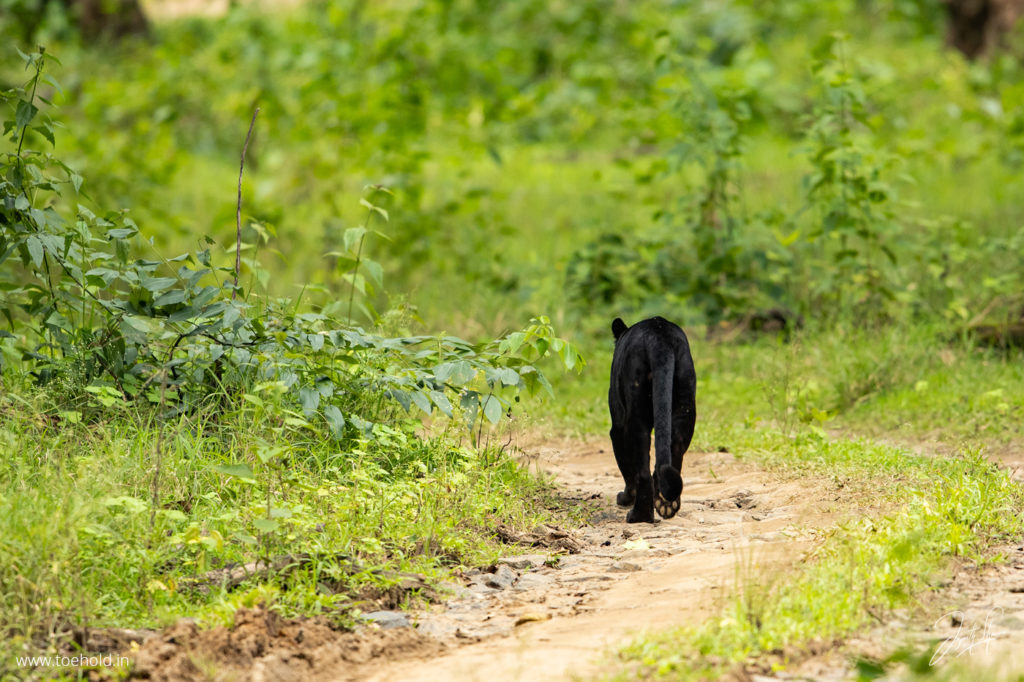 Interested in traveling to Kabini with us? Check out our upcoming departures.