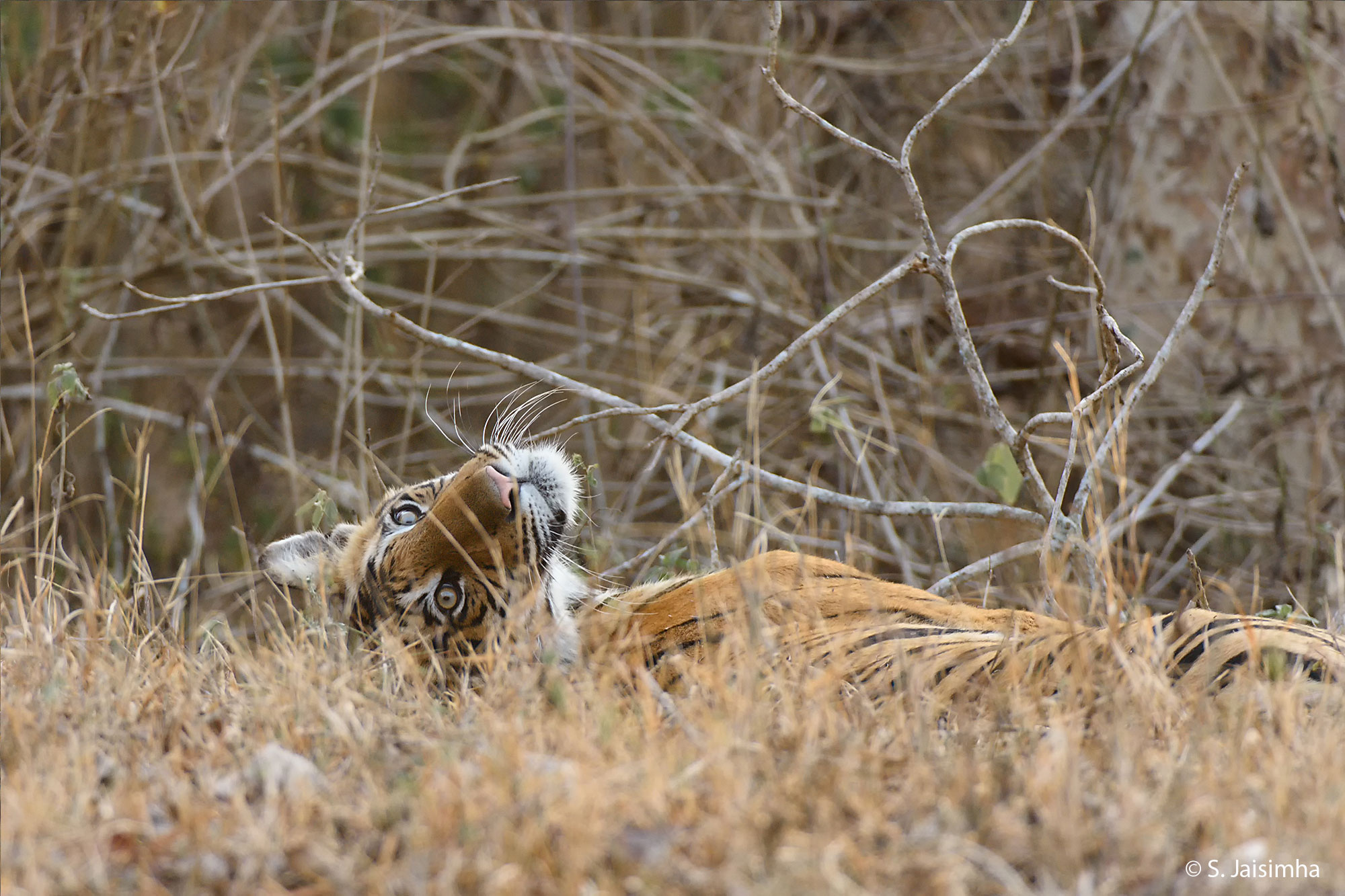 Kabini has been a consistently productive wildlife Photo Tour and the sightings in the depths of its nuanced green forests and meditative backwaters have been dramatic and exhilarating in every sense of the words.

In February 2017, the participants of The Leopard’s Lair Kabini Photography Tour had yet again a rewarding time watching the animals in the wild and making memorable images of them.

The group gathered at Kabini River Lodge for lunch on the first day of the Photo Tour. After getting acquainted with one another, the Skippers briefed the group about Kabini, its wildlife and the course of the Photo Tour.

On the first evening safari, the group headed towards Tiger Tank in the ‘A’ Zone of the Kabini forest, and on the way, they were already welcomed by herds of adorable spotted deer and sambar. They also lingered around the Sigur waterhole for some big-cat activity but upon finding none, Tiger Tank was still their best shot at tiger sighting.

That February evening, the forest seemed like it was still with almost no animal activity… but only until they went towards Sunkadakatte through the Double Salt Pit (DSP) Road. They saw three other safari vehicles in which people were still, all their gazes fixed in one direction. When they approached the place, they saw a tiger sleeping behind a mud mound by the road.

As if the sleeping striped beauty wasn’t enough to take the onlookers’ breath away, another tiger was spotted on the other side of the road! The participants’ hearts were thumping with anticipation to see the second tiger cross the road – and witness its regal walk – but the big cat seemed to remain adorably stubborn by staying in the bush.

Although both the tigers had held time captive and it seemed like an ageless experience to the participants, they had to move on to see more wildlife grandeur in the forest. They drove back through Tiger Tank, drove on the Power Line Road towards Balle, where they were greeted by a huge tusker’s magnificent presence. He was seen walking on the road, very cautious with each step, turning back and trumpeting. The safari vehicle stopped and perhaps the only sounds apart from that of the forest’s were the camera shutters and the excited hearts of the participants.

A huge herd of gaur was spotted near KV tank a while later. And only a little ahead, a massive male tiger was marking his territory. The shy cat disappeared into the thickets, and although the group couldn’t photograph him, it was a scene they would remember for a long, long time for the untainted joy it brought to them. And although he vanished from their sight, the sambar calls in the area made them feel his presence for a while longer.

They had to leave the forest after the gratifying safari as the light was fading away into naught. And even as they were heading out of the wilderness, they saw a tiger cub sleeping inside a bush near the DSP Road, which seemed to write the perfect ending for the evening safari. After returning to the lodge, a coffee break and a session on photography ensued at the Viceroy Bungalow. A delicious dinner later, the happy group called it a night.

Next morning, they ventured into ‘B’ Zone of the Kabini forest. Like an auspicious beginning, a brown fish owl was spotted at the Sigur Tank bund. The drive itself seemed more beautiful than expected in the lovely morning light. A safari vehicle near Sigur Road was known to have driven past a leopard, and the group drove towards the place with anticipation of the cat’s sighting.

They searched near the plantation area but to no avail. However, many spotted deer, sambar and an elephant on the backwaters were spotted in the golden light illuminating the entire forest. When the group heard faint calls of langur, they guessed that the leopard might have been active, drove back to the plantation area and waited there.

The spell of silent waiting was broken by an alarming sound of a tree branch falling, and following this sound was a grand vision of a handsome tusker crossing the road right before the safari vehicle! Adding to this drama was sudden panic everywhere when the spotted deer alarm calls reached a point of frenzy, their keen gazes fixed on the depths of the bushes ahead. This was proof enough that the leopard was on the move in the area.

The Skippers decided to keep the safari vehicle positioned at a spot where they expected they would have a great sighting if the leopard were to come out of the bushes, and the strategy paid off as a charismatic male leopard appeared like a charm, crossed the road and disappeared in the bushes on the other side.

The Skippers didn’t waste even a single minute and got the safari vehicle to reach Sunset Point where the leopard could be seen again. And their knowledge of these wild beings added more delight to the group as the leopard showed up again on the backwaters. Adding to this grand vision were hundreds of adorable spotted deer grazing, and langurs calling from inside the forest. As the leopard approached, the spotted deer lifted their tails and stamped their feet, reassuring the presence of the male leopard to the group. He came out to an open area and there was ample time to make great images of him.

The spotted big cat even met the gaze of the cameras that were hungering to seize him into stunning frames and one couldn’t help but smile at the shutter sound going frantic. Even after the leopard disappeared into the depths of the jungle, the surreal feeling of having lived those thrilling moments in the wild lingered on in the hearts of the participants.

Another safari vehicle informed brought the news that a tigress had been spotted at the Sigur Tank. By the time the group reached there, she had disappeared, but her presence was felt as they heard strong alarm calls of spotted deer in the vicinity.

The group came back to the resort for breakfast, and another elaborate session on various concepts of real-time photography by the Skippers ensued.

The evening safari was to begin in the ‘A’ zone again, at Tiger Tank. There was no sighting there and so they drove further towards Double Salt Pit. A tiger was seen sitting in the open, providing them a great opportunity for photography. It was adorable to watch him shake off the flies that seemed to trouble him by flitting about near his face. After a while, he got up and the participants made more pictures of him until he walked back into the thickets.

Several sambars in the water and Malabar squirrels were found at the Bisilwadi Lake. When the group came to S Bend Road, strong alarm calls of sambar and spotted deer were heard, but no cats showed up. The group left the forest and reached the lodge, to later attend a session on photography and image review. The happy mood prevailed, with more anticipation for more sightings the next morning, on their last safari. After dinner, they retired for the day.

A leopard was seen crossing the road at the periphery of the forest, and the news spread and reached the group as they geared up for their last safari the next morning. Although they couldn’t spot a leopard even after hearing calls, they got lucky as they went into the forests of Kabini. They saw two tigers by the side of a road they were driving on.

After a few minutes of photography, they drove further into the forest, and frenzied calls of spotted deer sensing something inside the bushes were heard, but no predator was seen. When the safari vehicle was sauntering cautiously along the winding roads of Kabini, the group got to see a leopard resting on the tree and photographed its effortless elegance to their heart’s content. They waited for a while to see if the leopard would descend the tree but it seemed to be just lazing on the branch it was perched on.

The participants were a happy bunch when they returned to the lodge for breakfast before they would disperse and go back to their nests. There were enough and more memories to be preserved carefully, some of which are now here as pictures, peppering this story of Kabini with striking hues that sing the songs of the wild.

For a similar or even more a fulfilling experience in the wild, join our The Leopard’s Lair – Wildlife Photography Tour to Kabini in either March or April!