I have a confession to make about my addiction. Tanzania. It is a drug and it courses through my veins, sparking lucid visions of endless rolling plains, the rhythmic drumming of a thousand wildebeest hooves, punctuated by a cacophony of whinnying zebras. The visions permeate my waking hours, leaving me wistful, nostalgic, with an irrepressible grin and a finger itching to trigger the shutter button.

Since my first visit in 2015, I have journeyed to Tanzania every year for four years in a row, in what has become an annual pilgrimage, to immerse myself in the richness of its bountiful wonders and to push my photographic boundaries further than before. That’s the beauty of Tanzania. Everything feels familiar, yet nothing stays the same.

When I first arrived in 2015, with no idea what to expect, landing in Kilimanjaro and boarding our custom-built 4×4 Land Cruisers lent an air of purpose and excitement. Driving through to Ndutu, our 4×4 sliding and fishtailing through the slick mud was an exhilarating experience, topped only by the sight of a gorgeous leopard descending an acacia tree at sunset, merely metres from our camp. The intrepid adventure had begun!

Exploring a place called Hidden Valley in Ndutu with the only watering holes for miles, the air thick with dust, surrounded by whinnying zebras and grunting wildebeest in their thousands was both a visual feast and an auditory experience not easily forgotten. The action came thick and fast, our vehicles alive with the clatter of tripping shutters marking the toll of shots being bagged, like a room full of typewriters.

The iconic Serengeti was even more resplendent than seen on television, with pools of light caressing the blonde grasslands, wherever rays of sunshine erupted through the thick clouds. We gorged ourselves on photographic opportunities, whether they were lions or leopards or avian life. Just when we thought we couldn’t top a photographic opportunity, another one materialised to take our breath away. Our last leg was the Ngorongoro Crater, an ancient volcanic caldera that was a microcosm of the Serengeti. The experience of venturing into the caldera was akin to an intrepid explorer discovering a lost world, awash with mist and fog hiding its denizens.

When 2016 came around, I was chomping at the bit to return to Tanzania and rediscover its wonders. This time we started with Ngorongoro and then moved down to Ndutu and finished at the Serengeti. It was on this visit that I learned how much of an impact the rains had on the movement of animals, especially the herds of migratory herbivores like the wildebeest and zebras in places like Ndutu and Serengeti. Ngorongoro remained unaffected as the animals that reside in the caldera are resident throughout the year and don’t follow the migration cycle.

Places like the Hidden Valley in Ndutu, which was abuzz like a gladiatorial arena the previous year, was now devoid of the herbivores, but the photographic opportunities were no fewer, with the focus now turning to the big cats. The most memorable experience was witnessing a huge matriarch elephant chase a pride of lions away from the vicinity of her herd. Then a moment that was for me the highlight of the tour: a lion pride climbing a low acacia tree to escape the heat. A pride of lions, on a tree! The photographic opportunities kept piling as we gorged on cheetah hunts, mating lions and mercurial leopards as we moved through to the Serengeti, before we returned home with our memory cards overflowing with pictures.

With the 2017 tour of Tanzania coming up, I was beginning to wonder if this was getting too repetitive, but viewing how different 2016 was to my first trip in 2015, it seemed worth experiencing once more. 2017 was a completely different kettle of fish, not only in terms of the wildlife experience, but also because I had evolved as a photographer and was looking for opportunities to experiment in situations where I had already made good images and was looking for something different. We landed as always in Kilimanjaro and headed to Ngorongoro. The crater delivered some wonderful opportunities, as did Ndutu, where this time I experimented with different techniques, to capture slow-exposures, panning images, back-lit images etc.

I especially love Ndutu because it’s the only place in Tanzania where you are allowed to drive completely off-road. This means that you can get as close to a subject as necessary, chose your position according to the angle of the sun, etc. This allows total freedom from a photographer’s perspective, as you can nail the shot without having to compromise.

On this trip we spent time with not just the big cats and mammals, but also celebrated the bounteous bird life that Tanzania is home to. Photographing some of the smaller species was a challenge and helped sharpen my skills. Serengeti was a showstopper, with some awesome opportunities, including witnessing and photographing an iconic Serengeti moment – a male lion on a kopje. The trip ended on a personal high when we flew back from Serengeti to Kilimanjaro, as I got to sit next to the pilot!

2018 made it four tours in four years. There was no way that I was not going back! This year Lake Manyara National Park was added to the list and was our first port of call. From new species of primates, to some stunning landscapes, the tour started with a bang and when we moved on to Ngorongoro, the experience only amplified further. This year the rains were late by over a month, which meant that our arrival coincided with the advent of the rains. What a difference it made to Ngorongoro! 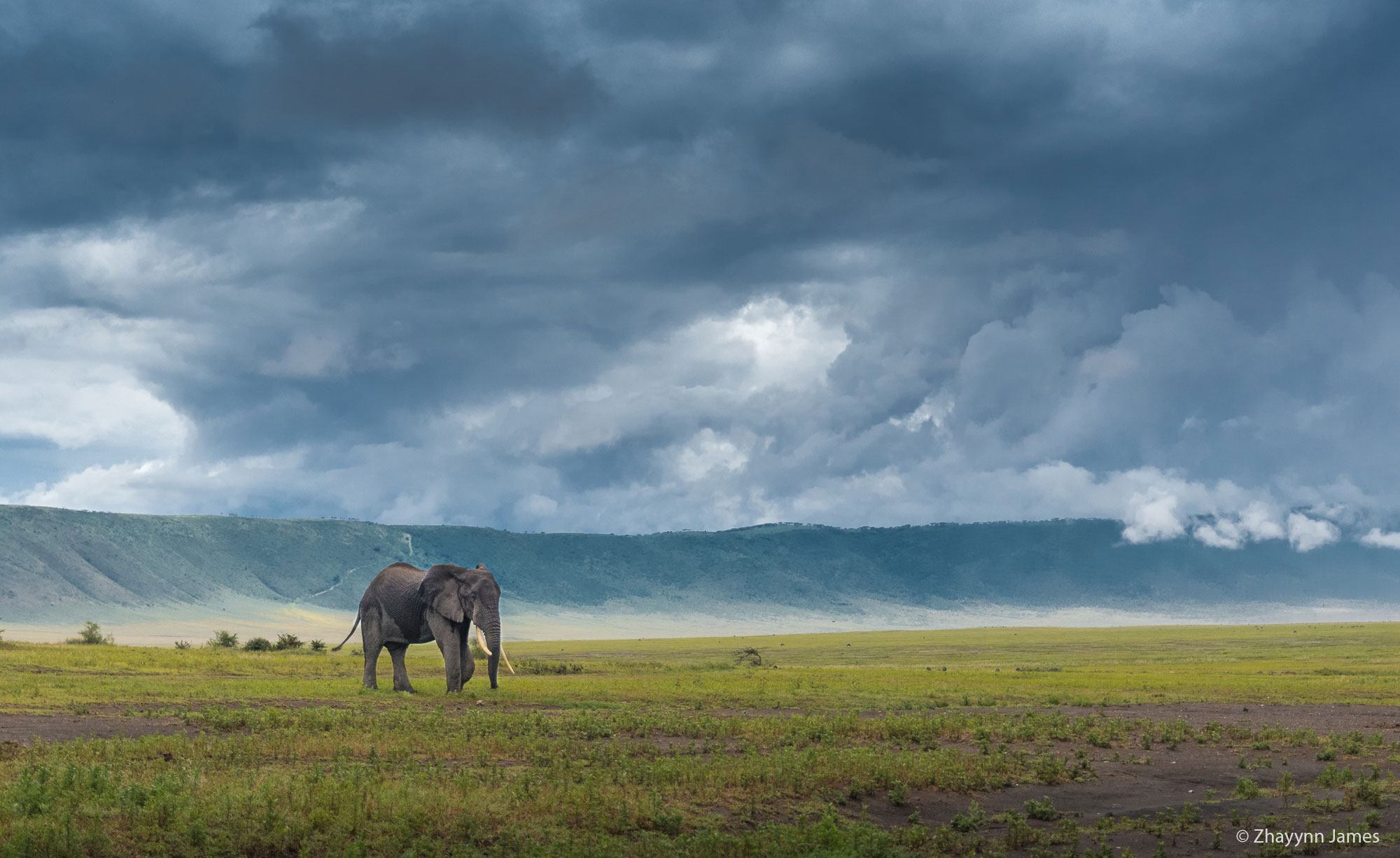 The experience of making wide-angle images with thick, glutinous grey clouds spilling over the caldera rim was simply breathtaking. In Ndutu, we stayed in a tented camp and were offered some wonderful hospitality in the midst of a breathtakingly beautiful landscape, where we could marvel at the brilliance of the Milky Way against an inky night-sky.

The photographic opportunities were tumbling out of the top drawer, with ridiculously gorgeous sunset silhouettes, hunts and chases, the highlight being a pair of lions chasing and killing a hyena, something I had never witnessed before. The surreal experience of witnessing and photographing a trio of cheetahs in the rain; the staccato of our shutters tripping every time, capturing a halo of centrifugal spray every time they shook themselves off. Serengeti was the home stretch, and the action and the opportunities did not let up.

From tracking and witnessing a leopard hunt and kill mere metres from our vehicles, to tracking and photographing a gorgeous alpha male lion atop a tall kopje, reminiscent of Disney’s Lion King, we gorged on a smorgasbord of photographic offerings. 2018 was without question, the best tour of Tanzania I have ever experienced, from a wildlife-experience perspective as well as from a photography perspective. From experiencing behaviour and natural history moments that I had never witnessed in all my travels to East Africa, to revelling in the photographic splendours on offer.

They say too much of anything is never good. However, it would be a safe bet to say that they didn’t mean wildlife photography on a Toehold Photo Tour to Tanzania. As I said in the beginning, Tanzania is a drug and the savannah beckons, its siren song luring me to its verdant grasslands where life thrums in the very air and my heart pounds to the rhythm of the place where all life began. Tanzania is calling and I must answer.

The author is an architect, passionate wildlife-photographer and long-time Toehold-Patron. See more of his work on his website, www.wildangle.in.[/vc_column_text][/vc_column][/vc_row]

PrevPreviousIn Pursuit of the Beyond: Deccan Chronicle, 1 April 2018
NextBusted: Four Myths about Africa TravelNext
More from the Blog

Thank you for contributing to the Toehold Blog. Zhayynn, loved it.

It was a pleasure. Thank you for inviting me to share my experience and hopefully inspire others to explore Tanzania. 🙂

Busted: Four Most Common Myths about the Continent Africa